The Ghost incidents suddenly come to an end and Boruto and his classmates are puzzled, but Mitsuki seems to know something they don’t. Mitsuki himself realizes he’s been undergoing some puzzling changes and questions his classmates in order to figure out his predicament. Soon after, a mysterious chakra begins to spread throughout the village. 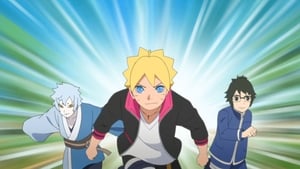